A dream of a Midsummer Night's Dream

Summer has reached Farleigh and, with it, a production as magical as you could wish for in a year that has been full of strange happenings! Under the exceptional direction of Mr Hession, Year 6 gave us a memorable Midsummer Night’s Dream, complete with outraged fathers, meddling fairies, wandering lovers and rude mechanicals, most of them hell-bent on getting their own way.

Mr Hession’s decision to dress the fairies as punk-rock party animals was the first he made, setting the tone for the rest of the production. It made sense for these magical creatures to look rebellious because they are the masters of mischief and mayhem! Their look was inspired by the current revival of 1990s fashion, including their rock, neon-banded hairstyles. As a foil for the colourful fairies, the human characters were dressed in neutral or dulled tones. The ‘play within a play’ cast were dressed in school uniform to provide a context for the group’s story, and they modelled their characters on stereotypical schoolchild behaviour.

The rock theme was picked up in the song selection which interlinked the scenes, chosen by Mr Hession as they reminded him of his childhood listening in the nineties. Many of them included lyrics about dreaming or love but with the grit of their genre, they gave the play an edgy feel, enhancing the lovers’ heightened young emotions and the warring factions between Titania and Oberon and giving weight to the way the fairies act up as their parental figures behave badly! Our Drama Ambassadors, Isobel Macintosh, Wilfred Hall and Sam Berry, did an excellent job operating the sound during the shows.

Songs
There She Goes by The La's; Parklife by Blur
I Want You to Want Me by Letters to Cleo; Cruel to Be Kind by Letters to Cleo
You Don't Own Me by Joan Jett and The Blackhearts; Kiss Me by New Found Glory
You Get What You Give by New Radicals; Dreaming by Blondie
Whole Lotta Love by Led Zeppelin

Deciding to dress the cast in contemporary clothing informed designs for the set. The beautiful Farleigh grounds didn't seem to fit the feel of this production, so it was moved to the amphitheatre and a modern, industrial-looking set was created out of blocks and scaffolding. Pupils rehearsed on the set from the very beginning so they could play around with blocking and levels. Cici and Hector, the two actors playing Puck were encouraged to move around the high structures in a way fitting to the maverick character, and their ideas were incorporated into the blocking of their scenes, making the most of the actors' athleticism and physicality.

The whole concept brought out the best in the casting, with many strong comedic performances rocking the audience with laughter! The lovers were dramatic and pathetic; Egeus, father of Hermia, was suitably overwrought with his daughter’s disobedience; Titania and Oberon were magnificent in their competition for the changeling; the fairies and both Pucks, in particular, tied the whole production together with their unique mixture of meddling mischief and adoring service to their master, and the mechanicals were hilarious, with standout interpretations from both Bottoms and both Walls! So far, the appreciative audiences have been made up of members of staff and pupils in their year group bubbles. We are looking forward to welcoming parents next week. Beware a soaking in the front rows! 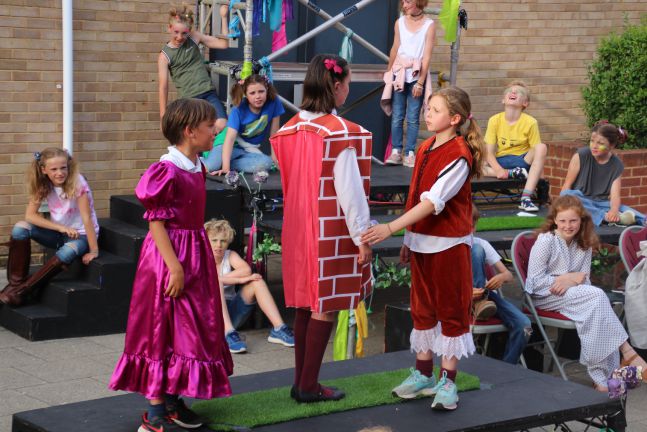