The Farleigh boarding community gathered together for an evening of music, dance and comedy at Farleigh’s Got Talent on Saturday. After a rigorous audition process, 20 acts made it through to the final night and the opportunity to impress the boarding community and our four fearsome judges!

The programme highlighted the children's hidden gifts and, like the sparkly decorations, they shone on stage. We had a huge array of performances: comedy acts, drumming skills, stunning singing and electrifying dance moves - even a cameo appearance from Fr Simon.

The Theatre looked suitably bedazzling, with a fantastic Farleigh’s Got Talent backdrop and an impressive lighting set-up. The entire event was self-taught, with all the children choosing and rehearsing their acts independently.

Mr Hession, Head of Drama, who is naturally an expert on such matters, was full of praise: "The quality of the performances was fantastic, especially when you consider that pupils organised and rehearsed their own routines without assistance from staff. As a judge, I was thoroughly entertained all evening!"

The evening was compered in fine style by Mr Whithear and Mr Matthews, both looking resplendent in colourful black tie with a whiff of the Blues Brothers about them. The all-important judging panel comprised Miss Dunn, Mr Gough, Mr Hession and Miss Mitchell. They gave careful consideration to the acts, balancing sheer entertainment value with the effort put into rehearsal, originality and ability.

Mr Whithear, Senior Boys' House Parent, explained just how thrilled the judges were by all the performances: "Farleigh’s Got Talent was amazing and the children’s performances were great. The whole atmosphere from start to finish was exciting and fun, and showed off all of Farleigh’s wide range of abilities. Many of the acts were what can only be described as ‘alternative’, showing originality, artistry and great enthusiasm."

It was inevitably tough choosing the winners, but a choice had to be made. Worthy winners on the night included:

Most popular: ‘The Veggies’ – Tristan, Seb and Charlie (Year 8)

It was truly an evening to remember for both the children and the audience. We were given an array of wonderful flavours in the variety of performances and equally in the delicious spread of food created by the catering team for the event. The audience enjoyed a sumptuous three course supper whilst watching the show, and, as Mr Matthews was quick to emphasise, 'a wonderful time was had by all'. What a night! 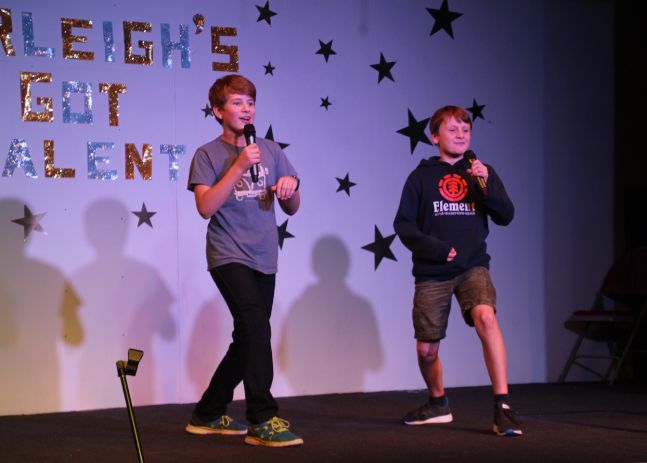