Alex gives an account of his latest ambitious project and physical challenge in his own inimitable words:

Just over two and a half years ago I, with a gentleman named David Collinson, cooked up an audacious project which fundamentally meant we were going to have one hell of a time in Ethiopia. That was the beginning but it soon grew into something where, whilst having a lot of fun, we could leave behind a meaningful legacy. Pair that with the University of Southampton Faculty of Engineering students and The Wild Wheelchairs Project was born (photo A).

We transported the world’s first solar assisted, battery powered, custom-built hand-cycle (photo E) to Ethiopia. The reaction you see in photo B was pretty common! But the legacy of the trip was key. We fundraised throughout last year to build an affordable wheelchair manufacturing facility in Bahir Dar to aid the mobility impaired in rural communities.

Disability in Ethiopia is viewed as taboo, a curse. Most will never leave their homes or communities and we wanted to show, with the help of Emebet (an upcoming star of Ethiopian wheelchair basketball – main photo), that we can still contribute and be inclusive in society.

Emebet’s mother was told by the tribal elders to discard her after her legs were crushed by a truck as she played at the side of the road. So the moment Emebet cycled through a small town in the Simiens, the reaction to her and the symbolism of her feat... words will never do it justice. Emebet and I agree that our disability, although arduous at times, has been more blessing than curse.

Another strand of the trip was to get two people with two limbs between them to the top of Ethiopia’s highest peak, Ras Dashen. Now, I love a bit of adrenaline junky stuff but the whole trip took the wind out of me for different reasons. When we finally made it to the summit of Ras Dashen I was greeted by the man who saved my life just over six years ago, Geoff Watson (the relatively good looking guy on the far right of photo D). He and his team at Winchester ICU are the reason I can watch Sam play football; the reason I can enjoy a glass of wine with Lucy on an autumnal evening. He was there because of me and I was there because of him. I love a good cry and, my goodness, did I have one at the top of that mountain!

The team you see in that picture made the seemingly impossible, possible. There is no such thing as solo endeavour - there is always a great team behind any incredible feat. These guys put everything they had into getting Emebet and me to the summit and I am eternally grateful.

The most important thing, however, that kept us all going was our very English sense of humour. Laughter has been the best medicine for me and I leave you with photo F. I won’t mention any names but Leandra Simmonds (the amazing lady who stepped in when my best friend couldn’t come with me on the trip due to a heart condition) mentioned one day that I shuffle like a Gelada Baboon. Look at that picture... I’m just not seeing the resemblance! 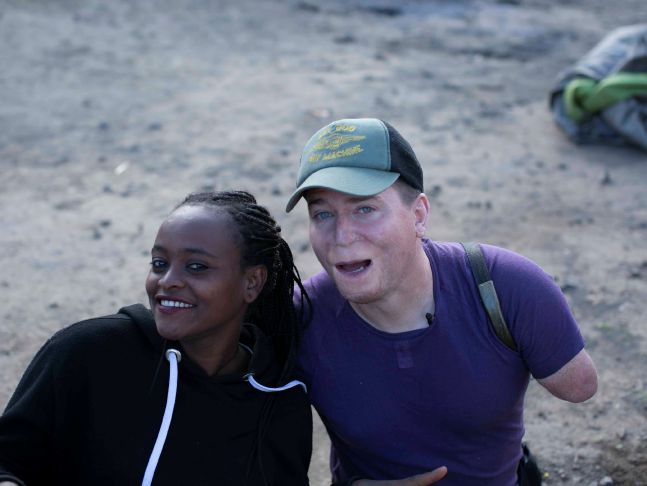